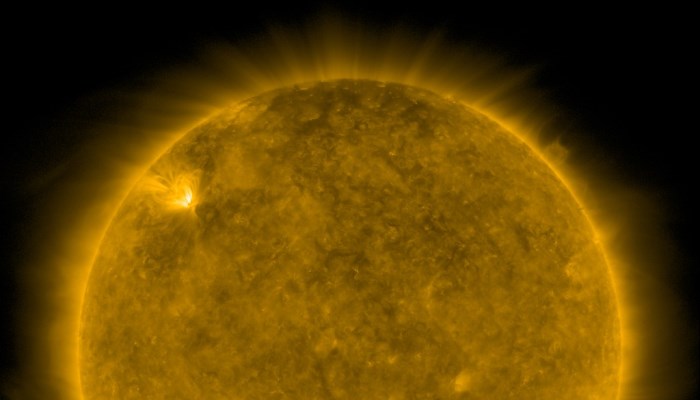 Sun on 1 June 2020. Image is taken by the AIA telescope located on the spacecraft SDO.


The first major spike of activity in the new 25th cycle on the Sun has ended. The peak of solar flares came on the 29th of May with two in a row large flares with a level close to M1, and later two more solar flares exploded with power reaching the level at about C1 in an interval of about 3.5 hours in between. The total flare activity index reached a maximum of 4.4 on 10-point scale, which corresponds to the top of the yellow level on the scale of the solar flares activity. Until the next, orange level, starting with a score of 5, the event lacked only 0.6 points.

Currently, the active region, which has formed a series of flares, is still present on the Sun and rotates with it toward the Earth, but, as it seems, is completely depleted its energy. From the point of view of the Physics, this means that the structure of the magnetic field has returned to a potential state, characterized by a minimum of energy at which any energy release is impossible. Theoretically, to draw out this region from this state are capable the strong plasma currents which are transforming the magnetic topology into a more active form, or the new magnetic fields emerging from under the surface and bringing additional energy with them. However, given the early stage of the cycle, the sun is now, it is extremely difficult to allow the development of such a scenario. The most likely is the opposite, according to which the region will not "survive" even before reaching the Sun-Earth line, where to it is rotating now and will disappear from the solar disk in the next few days.

Howbeit, the counter of solar flares of a new cycle is launched and currently has one class M flare with a score of M1.1, which is, so far, the largest flare in the cycle, and two other flares of the next class C, with scores of C9.3 and C1.0 points. During the previous solar minimum in 2008-2009, the Sun after leaving its hibernation period on 5 July 2009, when the first pair of flares occurred, had retired for 2.5 months until the 25th of September. Depending on how our star will calm down now, it will be possible to judge, preliminarily, how different the scenario of the new cycle will be from the previous one. However, it is noticeable, that in the previous cycle, the formation of the first Class M flare by the Sun took almost six months - the first such event was recorded only at the end of January 2010,. This time, the Sun began the cycle suddenly with an immediate flare activity of the level M. What is the meaning of this, and does it mean anything at all, is still difficult to say.

Describing the current situation on the Sun, it is noticeable that another (albeit extremely weak) active region is now observed also in the Southern hemisphere of the Sun,. Since, according to the physics of the Sun, magnetic fields, in the North and South of the equator, are formed independently of each other, this suggests that the new cycle has started in both hemispheres, at least in terms of the number of active regions. From areas of the flares, so far, the North of the Sun wins the South with a score of 3:0.